Squares and palaces in Turin When you go to one of the central squares of Turin for the first time, you will be enchanted for one reason : for their greatness that makes you feel tiny. It will be difficult to frame everything with your camera.

Piazza Vittorio Veneto: a scenery from which you can admire the hill We are proud to say that this this square is one of the largest in Europe. Here you can breath some sparkling air that comes directly from the hill. Whether you come from Via Po or from the streets that line the river, you cannot miss the sight of this huge square.

Starting from Opera 35, it will be the first square you can browse in your journey to discover the city. You will immediately have a taste of Turin’s majesty.

At every hour of the day you will find open restaurants and many people enjoying one of the most beautiful views of Turin : on the one hand the long Via Po that leads you directly to Piazza Castello, on the other the Po river, the Chiesa della Gran Madre di Dio and, higher up, the Monte dei Cappuccini, a viewpoint from which to admire the vastness of the city.

Walking on Via Po, once you leave Piazza Vittorio Veneto, you will arrive in the central square of Turin, as well as the historical core of the city. From here an interweaving of streets and stories unfolds. Here overlook the Teatro Regio and Palazzo Madama. If you look further, you will notice the Porta Nuova Station that finds a space in the background of Via Roma, the Turin shopping street. Palazzo Madama dates back to 1200 and it has undergone several restorations that increased its beauty. Today it is a museum and hosts exhibitions and events inside its magnificent rooms.

Once it was connected directly with the Palazzo Reale, of 16th century origin, through a gallery designed by Juvarra. It is a part of a vast museum complex that includes the Chapel of the Shroud, the Royal Gardens, the Royal Armoury, the Archaeological Museum and Palazzo Chiablese. You can see everything, from the monumental rooms to the small relics kept inside, with one ticket. 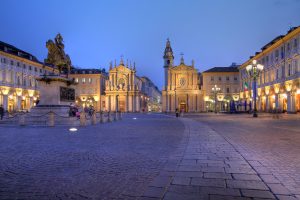 This square is specia,l thanks to the two almost symmetrical churches that head the opposite side of the same, coming from Piazza Castello: the churches of Santa Cristina and San Carlo Borromeo.

But there is something that makes it fun to wander around the square : will you able to see in which part of the facade some bombs, that have remained intact since the Second World War, are stuck? Called by everybody Porta Palazzo, instead of its original name which is Piazza della Repubblica, it hosts the largest open-air market in Europe, where one of symbols of Turin appears, the Porta Palatina.

Recently the Central Market was also born, where you can taste excellent finger food dishes. The square is vibrant and rowdy, to cross even just to be enchanted by the thousand colors of the goods on the market. And, why not, maybe even buy some food to cook in your kitchen.

OPERA35 IS PERFECT TO ENJOY ALL THE BEAUTY OF THE SQUARES AND PALACES OF TURIN , SIMPLY BY TAKING A STROLL. DISCOVER OUR ROOMS AND APARTMENTS, AND CHOOSE THE ONE THAT BEST SUITS YOU.